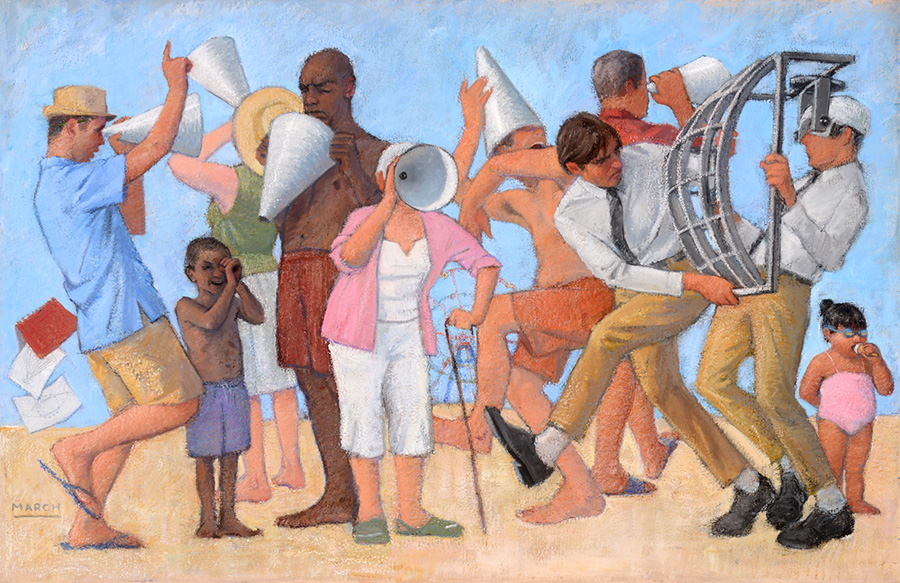 The Daily Nutmeg and the New Haven Independent both published articles on the recent “2020” show at Kehler Liddell Gallery and both featured my piece!

Check out “Seers” in the Daily Nutmeg by Kathy Leonard Czepiel:

An entirely different view is suggested by Eric March’s stippled, colorful Cone of Vision, an oil painting of a clownish group of people on a beach holding white cones to their eyes (or peering into them, or wearing them on their head), thus limiting what each of them sees of the larger scene. The reference, March explains in an artist statement, is to “a rule of perspective drawing that dictates that only a portion of one’s view should be included [in] a drawing to eliminate distortions,” and the point, or at least one of them, is that we each see only fragments of the world around us. In March’s painting, a little boy imitates the adults, forming a cone with his hands. Two young businessmen have complicated the exercise with a contraption of their own. A little girl stands to the side, unconcerned; she’s eating an ice cream cone. The elder of the group, a woman leaning on a cane, is looking outward through her cone. Her eye, like a penny at the bottom of a well, is fixed on us.

And read Brian Slattery’s piece in the New Haven Independent “Artists Have 2020 Vision”:

Other artists in the show ran with the association of the numbers 2020 with perfect eyesight. Eric March used it to connect the show’s theme to a painting full of energy and whimsy.